The Domaine de Suscinio : a castle, animations and a preserved natural landscape

Heritage of Brittany, the castle of Suscinio is a must-see in the  Golfe du Morbihan

Located in the middle of a protected natural park that is both rich and diverse, it offers a range of unique historical animations and is just a few minutes away from the beach.

A unique castle in the Golfe du Morbihan

800 years after the laying of the first stone, the curtain walls, walkway, drawbridge, loopholes and machicolations, the Domaine  de Suscinio and its castle are an extraordinary testimony of the life of the Dukes of Brittany. 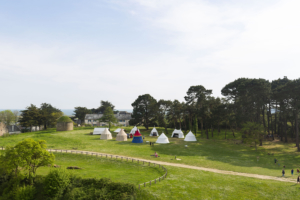 A place of abundant life in the Middle Ages, the Domaine de Suscinio has kept its bubbling soul. Determined to awaken fascinating legends and to tell the great episodes of its history, the Domaine offers you activities that are rich in discoveries all year long. 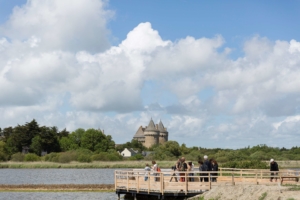 Naturally separated from the sea by a unique dune cordon in Morbihan, the marshes and the castle of Suscinio form a protected and classified  Sensitive Natural Space where biodiversity is of a great wealth.

Suscinio : The Domain of the dukes of Brittany

The enigmatic castle of Suscinio rises in a magnificent environment, by the sea, on the Rhuys peninsula, in the midst of Sensitive Natural Spaces.

Priory in the thirteenth century, around which developed an agricultural domain, it grows at the investigation of the Dukes of Brittany who establish there a first manor.

Redesigned and extended, it will become the favourite hunting house for crowned heads. Listed as a Historical Monument in 1840, it is now the property of the Morbihan Department which has been restoring it for more than 50 years.

Currently at the castle

Map of the area

Your visit begins in the house of the Duke of Brittany. The banquets’ room, the Duke’s private bedroom, baths, the Duchess’s wardrobe… In each room, you get to discover the Middle Ages way of life. Go back in time as you visit the castle!

In these impressive spaces, at times vertiginous, in the West lodging, are staged the myths that marked Brittany’s history, from the beginning of the 12th century until now. Merlin is guiding you throughout most of the building and helps you to get familiar with the main characters of King’s Arthur legend.

In the Middle Ages, hunting is the nobility’s favorite sport and leisure. It was regulated by numerous rules and required various skills. Discover these practices and techniques in our hunting camp.

If the castle’s trail has awakened your curiosity, continue on your way along the ‘king’s wall’. This trail offers small windows on the pond and an exceptional view of the castle.

A complete immersion of 3kms closest to the marshes.

These marshes, of a total surface of 40 hectares, are largely impenetrable and the perfect illustration that a preserved space is a rich space.

Go on to discover this landscape and see in a single glance Suscinio’s marshes and the Penvins chapel beach until the pointe de Beg Lann.

Let yourself be guided for a nice walk of 2,1km within full opened marshes.

By walking alongside this damp area, you will discover rare natural spaces in Brittany. The emersion/immersion alternation and the variation of salinity degree in the ponds result in various and open environments which suit numerous species including birds. It may be difficult to see them here, but if you listen carefully, you will be able to hear them.

Let’s discover the birds on this 1,9km trail!

This lagoon is a genuine ornithological haven and works complementarily with the East lagoon: it is a breeding, feeding and rest area. This outstanding damp area is home to numerous wild birds.

For a return to the castle, far from the road, you can take this 420-meter-long path, following the reed bed of Corn er pont and discover the amourettes fountain.

Buy your tickets online now
Scroll to top
Share This